Edward Henry Weinel was born in March 1938 at Hornchurch, Essex, UK. His great grandfather (Johanne Freidrich)was the youngest of four brothers who migrated to England from Germany in the late nineteenth century. The brothers were bakers and applied their trade in the London area.

Edward’s grandfather (Edward Eugene) second son of Johanne, served from boyhood in the British Army as a regular in the Royal Artillery. He was killed in action during the first world war at Ypres.

Edward’s orphaned father (Frederick Eugene) served in the British Royal Air Force as a Halton apprentice and afterwards as an RAF engine technician, until 1934. Later he continued his military aviation career with British Air Ministry as an AID (later called AQD) aircraft examiner.

As a result of his father’s life in aviation, Edward Henry also took up a career in aircraft maintenance engineering.

After a long apprenticeship from the age of 15 until he was 23, Edward elected to work overseas with British companies holding foreign aviation contracts.

His first sortie abroad took him to the Sudan where he helped in the maintenance of civil aircraft used in aerial crop spraying operations. Thereafter, Edward served for some forty years overseas, involved with both military and civilian aircraft maintenance.
He retired to Spain with his family in 1995. Where he paints in watercolors and teaches at a local art center. He took up writing in 2002.

Edward’s first book “Would a Man Return” describes his upbringing, schooling and apprenticeship leading up to his departure from England to work abroad. The work is an autobiographic, modern history written in the third person and is an impression of his early life’s trials and tribulations.

He continues his writing with a series of follow-on books (as yet to be published,) each depicting consecutive parts of his adult life abroad thereafter. 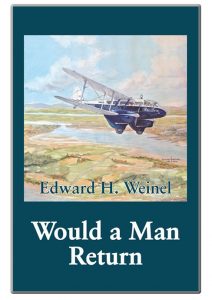